THE NEXUS OF SCIENCE & SPIRITUALITY
Excerpt from 18-Karat Karma Copyright 2010
by Samuel O. Spooner
18-Karat Karma has been called "possibly one of the best Zen stories you'll ever read." The protagonist of this fast-paced, thriller-fiction murder mystery story is twenty-one-year-old Johnny Sampson, a highly principled Zen follower with a black belt in Karate. The primary theme of the novel is Sampson’s struggle to remain faithful to his most cherished Buddhist principle, non-violence. The excerpt (in white) below, however, focuses on a strong secondary theme, his quest for a better understanding of what he characterizes as the nexus of science and spirituality.
For Sampson this nexus represents a mostly uncharted metaphorical high-ground puzzle map where the intuitive philosophical understandings of ancient Taoism and Buddhism interlock neatly with the cutting-edge empirical conclusions of contemporary science. Thus, armed with ideas gleaned from writings such as The Tao of Physics (in which Fritjof Capra details this interlock), and The Universe in a Single Atom (in which the Dalai Lama observes that the methods of science and Buddhism ‘share a strong empirical basis’), Johnny Sampson speculates that perhaps this convergence also represents the starting point for the reconciliation of physics and metaphysics—science and spirituality. While he is fully aware that the two disciplines proceed through totally different methodologies (and that many scientists would soundly reject any effort to link such findings), he is intrigued by the idea that this nexus might constitute the foundation for scientific spiritualism, especially when combined with a universally  accepted concept like cause-and-effect karma. For here is an ethical principle that is both consistent with human freedom and that (unlike stone-tablet moral codes)   actually confers practical behavioural guidance by which  to live. He is intrigued, too, by the prospect of working toward a fully integrated outer-and-inner world (empirical and intuitive) theoretical explanation regarding the ontological status of the  continuously metamorphosing,  seemingly insubstantial, and frequently  ephemeral fundamental particles  (that is,  quantum fields of energy) that underlie every ‘thing’ in the universe.

For it is through his own intuitive grokking of this underlying reality—through the complete extinction of any vestige of ego during deep meditation—that Johnny Sampson has experienced awareness of immediate connectedness to this ever changing ALL—to the reality described both by quantum physicists and post-nirvana Buddhists. Sampson intuitively understands that this 'ever changing All'  is in fact  the Mind stuff  of which, according to Buddhists, the actual  substratum of reality is composed. And although the deep-meditation experience is otherwise ineffable, the awareness it bestows is an awesome revelation through which even Death itself is rendered meaningless.
It is on this foundation, then, where quantum physicists quietly congregate with Eastern mystics to share empirical and intuitive insights, that our protagonist proposes to erect his future edifice to scientific spirituality. The paragraph in white below (an excerpt from page 552 of 18-Karat Karma) attempts to articulate some of the seemingly ineffable conundrums that lie at the heart of the novel's hypothetical ethical high ground, the nexus of science and spirituality, particularly as it relates to the impermanence of all forms.

QUESTION: If a single drop of rain falls into a perpetually flowing stream, does the drop cease to exist?


"The truth of Zen can never be articulated using words—it must be understood intuitively through direct experience. Nevertheless, the concept of non-attachment lay at the heart of Johnny’s interest in the nexus between science and spirituality—so, if he wanted to point a follower in the right direction, he must attempt to articulate the meaning of non-attachment using mere words such as self and belief and concept. For that is exactly what they are, mere words—symbols representing an almost universally unquestioned, yet non-existent reality. Ironically, the evolution of language had become man’s quintessential double-edged sword. Had it not, on the one hand, in a practical sense, facilitated the interaction of human beings in the symbolic, virtual world it had created? Yet, on the other hand, had it not also given rise to the dualism that severed man from his ability to directly intuit the true nature of reality—the impermanence of all forms? Was not the impermanence of all forms the central teaching of the Buddha? Had not the Buddha taught that all suffering arises because we insist on trying to hold fast to imaginary fixed forms—phantasmal linguistic unicorns—beguiling, specious beasts masquerading as an enduring object, an eternal idea, or a permanent self? Had not modern physicists discovered the truth of ancient Buddhism and Taoism—that the in-fact monolithic essence of reality always manifests itself as a multitude of forms instantaneously materializing and disintegrating, metamorphosing themselves one into the next in a never-ending flash dance? Had not the quantum and relativity theorists discovered while searching for the hypothetical fundamental lasting building blocks of the universe—for some sort of solid elemental particles that survive unchanged from instant to instant—that there was nothing to be found other than constantly vibrating waves of probability, a complex web of interdependent, ever-evolving parts of the whole? All that exists is the never-ending succession of ever-changing nows that at any given instant constitute the totality."


If this blogspot piques your curiosity for Zen thriller fiction, you might very well enjoy 18-Karat Karma.   The novel has been appropriately labeled a true oxymoron, a fast-paced, Zen-based murder mystery story.
For more information, please go to: http://www.zen-mystery.com/
Posted by Samuel O. Spooner at 12:06 PM No comments: 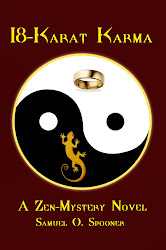 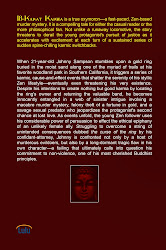 "All sciences are now under the obligation to prepare the ground for the future task of the philosopher, which is to solve the problem of value, to determine the true hierarchy of the values." FRIEDRICH NIETZSCHE

"The individual is an aperture through which the whole energy of the universe is aware of itself." ALAN WATTS

"I consider the ambition of overcoming opposites, including also a synthesis embracing both rational understanding and the mystical experience of unity, to be the mythos, spoken or unspoken, of our present age." Werner Heisenberg---One of the Fathers of Quantum Physics

"There is a systematic training which can lead to the empirical conclusion that a continuity of consciousness transcends the limitations of one body, one life." The Dalai Lama

"In profoundly stilling the mind, Hindu and Buddhist contemplatives have allegedly probed beyond the realm of ordinary human mind to an underlying substrate consciousness .... (an) underlying substrate which carries on from one life to the next." B. Alan Wallace
http://www.alanwallace.org

"What the Buddha is really saying is that if beings connect with the ultimate reality, from which all things are composed, they would automatically cease clinging to the delusion that things are unique and substantive. This would put an end to the cycle of birth and death. In addition, they would realize that things have never been other than illusory formations of the absolute substance which is Mind."
The Zennist, February 2011